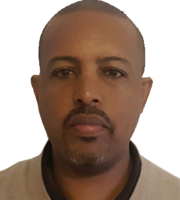 Biniam F. Ghebremichael is an Eritrean lawyer, who served as a Judge at Civil and Appellate Regional Courts in Eritrea from 2001 to 2007. He obtained his primary legal education, Bachelor of Laws (LLB), from the University of Asmara in 2001. After a one-year detention without trial for trying to flee the extremely repressive political situation in Eritrea, he was assigned to the Eritrean Airlines in which he served as a Legal Counsel until November 2014. He also served as Director of Administration, and Secretary of the Board of Directors of the Eritrean Airlines. In addition to his full time positions, between October 2012 and November 2014, he taught law at the Adi Keih College of Law (part of the University of Asmara). He also served as a legal consultant in the area of mining law, taxation law and other aspects of company law.

Biniam is a Country of Origin Expert for the Dutch Refugee Council and an Expert Respondent for the World Bank Doing Business Project. Most recently, Biniam served as an expert witness in a Canadian lawsuit on corporate social responsibility, Araya v. Nevsun Resources Ltd. 2016 BCSC 1856, in which a landmark judgment was delivered by the Supreme Court of British Columbia, based on his expert opinion, to rule that the lawsuit should proceed in British Colombia as the plaintiffs would not get a fair trial in Eritrea. Currently, Biniam is a Consultant and Researcher at the Natural Resources Governance Institute and maintains affiliation with the Rule of Law Program at Tetra Tech DPK in San Francisco. Biniam is one of the Emerging Leaders in African Mining, young African professionals who deal with mining and development, and have been identified as emerging leaders in their areas of expertise by IM4DC and the African Minerals Development Centre (AMDC).